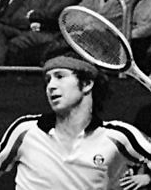 Stuart Appleby interviews French magician Fabrice Santoro during the AEGON Masters Tennis at the Royal Albert Hall after he defeated Younes El Aynaoui 6-7 (2) 6-4 10-8 in his opening match. The 39-year old, who was making his ATP Champions Tour debut in place of the injured Greg Rusedski, wowed the London crowd with his unusual style […]

END_OF_DOCUMENT_TOKEN_TO_BE_REPLACED

Feel free to drop me a message via the contact section.