Podium reporter Stuart Appleby reports on the first ever competitive event to be staged at the Olympic Stadium – the British Universities and Colleges Sport championships (BUCS).

More than 1,000 students from across Great Britain competed in 15 disciplines and showcased their talent to as many as 40,000 spectators in the official London 2012 pre-Games curtain raiser (the London Prepares series).

Stuart completed the following (video) interviews, which are featured below, during the four-day championships. 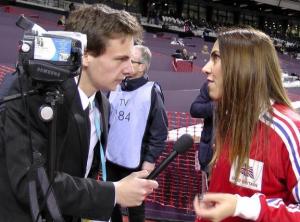